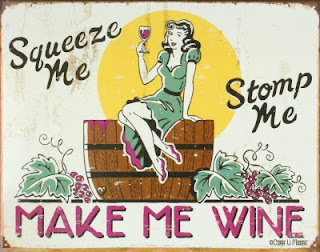 France and Napa and Italy- oh my! All the big guns were out at the 2009 New York Wine Experience event hosted by the Wine Spectator last weekend. It is an affair I look forward to every year and was thrilled I was able to attend again! On Friday night, I made my way over to the Times Square giant--Marriott Marquis, to peruse around the “Critics’ Choice” Grand Tasting session. I was met at the top of the escalator by my drinking buddy for the evening, Ira Norof, the Wine Educator for Southern Wine & Spirits as well as the new president of the Society of Wine Educators. I met Ira several years ago during my time with Southern Wines & Spirits, he was a great mentor of wine to me, and continues to be to this day! So with glass in hand we sought out to taste some of the great wines of the night—some in which I have only heard mythical stories about and didn’t know actually existed i.e. cult wines. The event spanned over 2 floors and took up 2 large ballrooms in the hotel---it was virtually an oenophiles wet dream! Every wine featured was a top-scoring wine (90 points or above), and personally being poured by the best winemakers, vintners and wine personalities from around the world.

We opted to start on far left of the 5th floor with a bit of bubbly, before diving into the coveted reds. Our first stop was Pol Roger, where we tried the Brut Blanc de Blancs Champagne Extra Cuvée de Reserve 1999. It was a nice palate teaser, but not my favorite sparkler of the night. Next we moved onto the Louis Roederer Brut Cristal 2002, although this is a fabulous wine, a small part of me wanted to bust into a Notorious B.I.G. song---but I refrained! We then tried the Krug Brut Grande Cuvée, a well crafted wine made from a blend of several vintages. Having to get my California fix early on, I moved over to the Schramsberg table for a glass of the J. Schram North Coast 2001, a rich and dry sparkling wine. Saving the best for last, we tried the Brut Dom Pérignon 2000, my favorite of the bunch. It showed beautifully and resembled all the details of what a fine Champagne should be.

After the Champagne we cruised around the event to try a few of the standout whites before turning our palates over to the reds, these were my favorites:

· 2007 Louis Latour Corton-Charlemagne: Elegant, crisp and delicious! I even got to meet Louis Latour Jr., very nice guy.
· 2005 Robert Talbott Estate Cuvée Audrey Chardonnay: Clean wine with mineral notes from the Central Coast of CA. The owner Robert told us some pretty crazy stories about Cyotees in the vineyard.
· 2007 Pascal Jolivet Sancerre Chateau du Nozay: a true showing of a Sancerre- yum!
· 2004 Hugel Riesling Alsace Jubilée: A refreshing wine without the “syrupy” sweetness that most Rieslings tend to have.

With 2 hours left of the Grand Tasting, we were ready to let loose on the reds. The only problem was, that there were so many amazing wines to choose from we had no idea where to begin---but somehow we managed to navigate and find our way through to purple teeth heaven! Here’s the golden list of what we tasted in alpha order (and just to give you a scope of the size of the event, we only tasted about a ¼ of the wines that were there). Each wine we tasted was fabulous--I’m a very lucky girl indeed:

In addition to the Grand Tasting I also attended a few seminars on Saturday, for my recap of the Four Chefs Food & Wine Paring seminar (with Mario Batali, Wolfgang Puck, Emeril and Charlie Trotter) visit the Examiner.com
Posted by Emily Nordee (Em a la Mode)