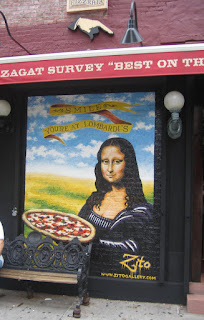 If someone were to ask me what my favorite food is, I would hands down say PIZZA! There is just something about the combination of the melted gooey cheese, tangy tomato sauce and toasted crust, that makes my mouth water just thinking about it. I have been and will always be a pizza fanatic! My love affair with pizza dates back to my early childhood where pizza was considered a celebration food at birthdays, slumber parties, holiday affairs and school events. It was also used as a form of reward, i.e. after a game, having to stay in with a babysitter, or getting a good grade on a test. In college pizza was a staple in my diet, it was inexpensive and was always a crowd pleaser, and was the food of choice when pulling an all nighter studying for that bio-chem midterm or to fulfill my drunken spirits after a night on the town. But it wasn’t until recent years that I began to look at pizza as a gourmet food, and when I officially started my mission to find the perfect pie. Having the luxury of living in NYC gives me the perfect platform to explore, as you will most likely encounter a pizza shop on almost every corner you turn, but as I have learned throughout my years of research, you have to dig a bit deeper to find that memorable or orgasmic slice.
-
I have an on-going list of favorites that I have discovered here in NYC and beyond, but one that I am particularly fond of these days is a little place called Keste (meaning: this is it, in Italian) in the West Village. Their pizza is unlike any other that I have tasted, the dough is pillowey and light and slightly charred from the wood-fired oven, the simplicity of the sauce with the tart/sweet flavor of the tomatoes is cravable, and the cheese is beyond fresh! They have definitely made some noise in the media and have been praised for the handcrafted Napoli pies they are turning out.

So when my friend Roberto Caporuscio , owner and chef at Keste, offered to give me a hands on pizza making class, I gladly accepted and opted to invite a few friends! Roberto is the the American-chapter President of Associazone Pizzaiouli Napoletana , so I was honored that I was learning from the best in the biz! 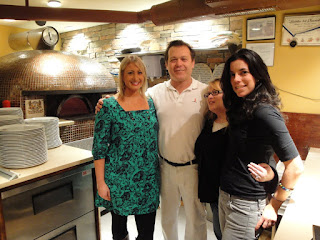 The lesson began with some interesting historical facts about pizza:


-The first documentation of pizza was in the 16th century, in Naples, where they made a dish with flour, olive oil, lard, cheese, and herbs, like a white pizza. 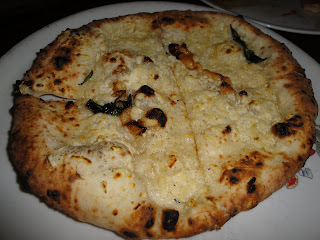 -In 1522 Tomatoes were brought back to Europe from the New World (Peru). Originally they were thought to be poisonous, but later the poorer people of Naples added the new tomatoes to their yeast dough and created the first simple pizza.


-In 1889, A baker named Raffaele Esposito created the "Pizza Margherita", a pizza garnished with tomatoes, mozzarella cheese and basil representing the colors of the Italian flag, to welcome the Queen of Italy, Queen Margherita, to Naples. She loved it and the name stuck to what we know it as today! 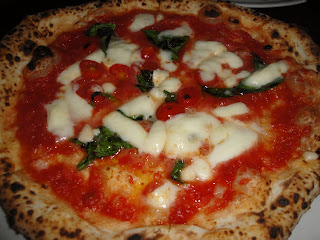 -In the late 19th century, pizza was sold in the streets in Naples at breakfast, lunch, and dinner, most people in Naples eat pizza 7x a week….this is my kinda town!


- In 1905, Gennaro Lombardi claims to have opened the first United States Pizzeria in New York City. 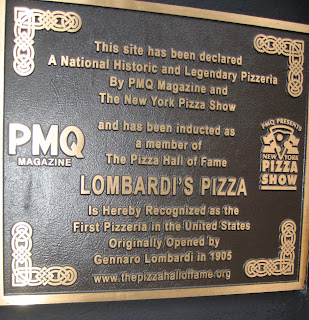 Once we began to talk about techniques he explained that the flour is a key if not the most important ingredient in the production of pizza. Roberto uses Antimo Caputo, “double zero” flour at Keste. It is made especially for pizza from seven different kinds of wheat. The wheat is ground very slowly so as not to damage the flour and the nutrients. This flour creates a dough that is easier to stretch and the slow rise gives more flavor. Roberto, hand mixes the dough with water, yeast, and salt, then lets the dough rest/rise at room temperature for at least 8 hours before using it. This gives the dough lightness and creates a better crust all around. When handling the dough he explained that you need to be gentle and not to over stretch it, because if you over-work the dough you will wind up with a chewy/tough crust.


After the overview, we were ready to roll, I started patting my dough ball into a flattened round shape, slightly pulling it out each time I flipped it between my hands. 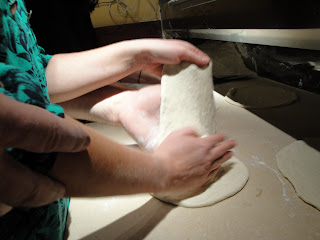 Once it was about 12 inches around I dressed it with the sauce and other accoutrements, before putting it into the 900 degree wood-fired oven (all imported from Naples). The toppings Roberto uses are the finest and fresh ingredients from sources such as Di Paolo. His pizza is almost an art form in the way he treats each pie. 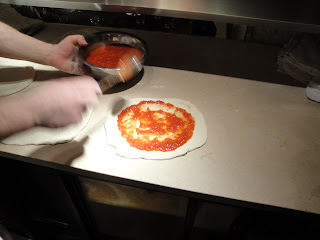 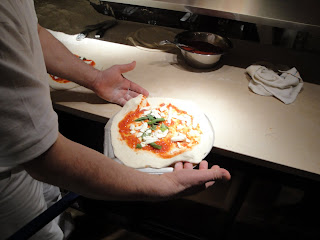 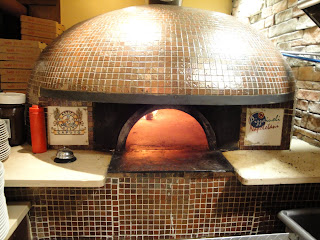 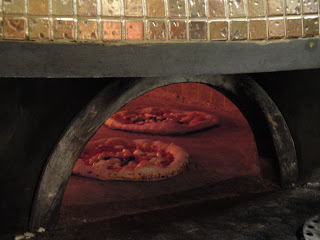 Moments later, I was surprised to see that the pizzas were only in the oven for just about 1 minute before being removed and served. They had a perfectly puffy and charred crust, the cheese was melted and the smell was divine…I couldn’t wait to dig in! 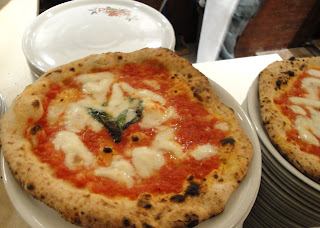 Our class moved over to a table where we were served a Grangnano wine, Penisola Sorrentina “Lettere”, think Lambrusco style, to go with our custom pies. As each of us enjoyed the first slice of our own creation, we then switched plates to try each others for the second slice. It was interesting to see the difference in the taste/structure of the pizza; they were all a bit different even though the ingredients were the same. I think I got a little over-zealous with my dough, it was slightly chewier then a few of my classmates…I guess I have some practice to do! Roberto also brought out several signature pies for us to sample as well, one of my favorites included a butternut squash (for the base), chestnut cheese, mozzarella and basil- yum! He also introduced us to a dessert pizza with nutella, it was delicious. 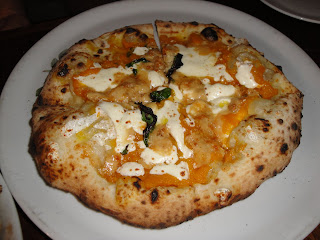 To make the “Keste” style pizza at home, Roberto advises to use this recipe.

2. Combine the flour and sugar. Then add the wet ingredients, and start working the dough.
3. Roberto learned how to mix by hand, but realizes that machines are helpful. If you have a KitchenAid, put it on the lowest speed possible. However you decide to mix the dough, stop after ten minutes, or when it isn't sticky anymore.

4. Let dough sit for an hour, covered under plastic.

5. Form into balls, about 20 ounces each. Store balls in a cool spot, either the fridge or counter-space, for at least 8 hours to let the dough rise.


6. Preheat oven to 500°F, or the highest setting possible. Spread dough on a baking pan or stone, gently stretching the edges.


7. Bake the dough for ten minutes before adding toppings. Then add the tomato sauce and cheese, etc. and bake for an additional 5-7 minutes until cheese is melted.
I can't wait to try this at home...it could be very dangerous (or slightly addictive)!

In addition to Keste, here are some of my other favorite pizza places....the list is always growing, so if you have a suggestion please let me know:


Vezzo: Ultra-thin crust pizza, for days when you are craving pizza but want to keep the calories low. Located in Murray Hill at 31st and Lexington.


Motorino: Similar to Keste’s style, offers some unique pizza combos like the Roasted Brussels Sprouts and smoked pancetta. Located in East Village and Brooklyn
Peasant: An Italian restaurant that makes a fabulous pizza! Located in Nolita on Elizabeth near Spring


La Villa: A neighborhood joint in Park Slope Brooklyn, the Focaccia di Nonna is a must!


Pizzeria Bianco: This place is incredible and in an unexpected location: Phoenix, AZ. Chris Bianco is the man behind the pie, and he definitely knows what he is doing… worth checking out if you are in the area, I’m still dreaming about the time I went!
Lombardi’s: The original pizza joint…first in the US, and still turning out amazing pies! Located near Little Italy on Spring and Mott.