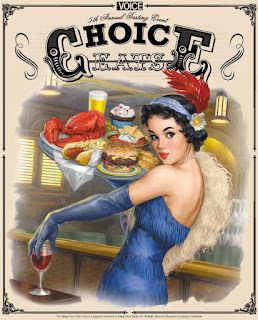 Last night, on a blissful evening, Tuesday, March 13, it seemed as though the New York weather was finally in full “spring” ahead. I gladly shed my winter coat as I headed out for the 5th Annual Village Voice Choice Eats Event at the 69th Armory on Lexington Avenue.

The event, hosted by by Village Voice resident food critics, Robert Sietsema and Lauren Shockey, hand-picked each of participating restaurants to showcase. Choice Eats is one of New York City's favored food fête’s where one can sample food from the most sought after restaurants across all the cities boroughs all under one roof for one night.

After a short cab ride downtown, I arrived on the scene and quickly toured the space before the crowds started flooding in. I was lucky enough to map out my food journey ahead for the evening,but in order to prep my palate, I stopped by to get an icy cold beverage at the Tito’s Handmade Vodka table, where Matt Purpura, Tito’s Brand Ambassador graciously mixed up a special “spirited” cocktail before sending me on my way.

My first stop was the Meatball Shop, they were dishing out an herbed chicken meatball garnished with sautéed asparagus tips and mushrooms in some sort of brown gravy-ish sauce. It was well seasoned and hit the spot in true comfort food fashion!

I then moved on to see my friends over at Ditch Plains. Chef Marc Murphy was serving up his infamous Mac-n-Cheese Hot Dog! With a big smile on his “good looking” face, he handed me a bite which was oozing with melty, decedent cheese! It was dangerously good! As I swallowed the last morsel, I saw fellow food friend, Emily Karpin, who recently took a job with Chef Murphy and was helping to man his table for the evening. I always love to catch up with friendly faces at these large scale events, as they can be quite overwhelming at times! After chit chatting for a few minutes, I saw the crowds rolling in. I decided to get moving, especially if I wanted to taste my way around, as this event was expecting over 2000 hungry New Yorkers! 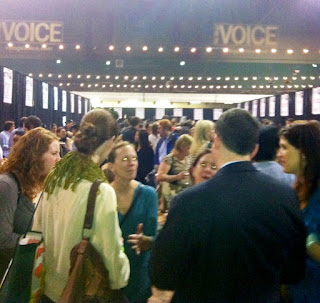 Next to Ditch Plains was the Red Hook Lobster Pound table, where a Lady Gaga look-a-like was providing some form of entertainment (I think). Either way, I made sure to grab one of their shrimp rolls before the lines got too intense. I didn’t particularly care for the roll, unfortunately, as there were scallions on top (and those of you who know me well, know I despise any form of raw onion), and it was also a little too heavy handed on the mayo. But, I will give props to them for the bun, it was toasted to buttery perfection and the inside was pillowey and soft!

Across the room I noticed a circus like novelty, the Dirt Candy table was making Tomato Chipotle Cotton Candy. I maneuvered my way through the wall of people and get a stick of the fluffy stuff. It was sweet on the initial taste, but lingered with a spicy smoky savory finish. It was definitely the most interesting thing I tried throughout the evening! Not saying I loved it and I’m craving more, but I have to give it up to them for uniqueness! 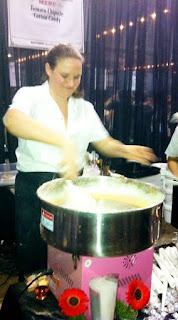 As I made my way around the event, I was able to try many different bites from several of the featured restaurants. It seemed that pork was the most popular ingredient of the evening, and noticed at least 10 restaurants dishing it out in some form.

The longest food lines seemed to bellow out from Luke’s Lobster Bar, Goat Town and Red Hook Lobster Pound, along with any of the wine, beer and spirit tables. One complaint I had about the event, was the location of the beverage tables. They were all grouped together, making it a cluster to get to them, rather than spacing them throughout the room.

After a few hours of sampling in a room that now felt like a sauna, my stomach was full and I was beat, so I decided to call it a night!

Ample Hills Creamery (Brooklyn): Salted Carmel Ice-cream! This was hands down the best thing I tasted all night…and I’m not even an ice-cream person. It was rich, smooth, artisanal, with the perfect amount of sweetness, and had some sort of toffee style cookies in it, making it ridiculously good!

Porchetta (NYC): Toasted Crostini with braised porchetta ragu. This was craveable! It had a rich tomato back from the ragu and pork that was perfectly braised. It was also easy to eat (only 2 bites and no mess), which is always a big plus at events.

Resto (NYC): Boudin Noir Baked Beans with House Made Jersey Pork Roll. I love this restaurant…they are always serving up quality food in my book, and it held true for this dish.

The Blue Stove (Brooklyn): Decadent Chocolate Bourbon Balls. These girls had the cutest and well-designed table and overall concept. They also made some mean balls, yum!

Brooklyn Brine (Brooklyn): Damn Fine Pickles…and they were! Served whole, and had a smoky note, not too salty. The main pickler said he ages them in Whiskey Barrels which is why they have a bit of char of the nose.

Xi’an Famous Foods (NYC): Cold Skin Noodles. These were awesome! The noodles are all hand-pulled and were served in a citrus spicy vinegar sauce, with veggies and shrimp

All and all it was a fun event and I’m glad I was able to partake!

Cheers and Happy Eating until we meet at the next soirée