This Little Piggy Went to Momufuku 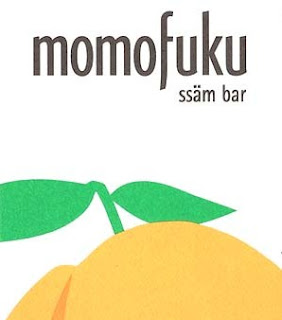 On a blissfully lazy summer Sunday, I quickly jumped out of bed, put on my running shoes and hit the streets of NYC. I decided it would be in my best interest to get some exercise in before indulging in the feast ahead of me that night: the Bo Ssam at Momofuku Ssam Bar---or otherwise known as a huge heap of roasted pork butt with a series of accoutrements! It has been something I have been eager to try for quite some time, but couldn’t seem to gather a group of 6-8 hungry pork eaters to partake in the delicious challenge. Luckily my friend Shari stepped up to the plate and organized a dinner with like-minded foodies where the Bo Ssam would be the main attraction!

So at 6pm our group of 7 gathered at Momofuku Ssam Bar in the East Village ready to chow down. If you didn’t know already (as he is a media-darling in the food world) the restaurant is owned by David Chang, a rising Korean American chef in the NYC restaurant scene, and Momofuku Ssam Bar is a great place to taste a variety of interesting Korean inspired dishes, served mostly in small plate form, great for sharing and group dining. 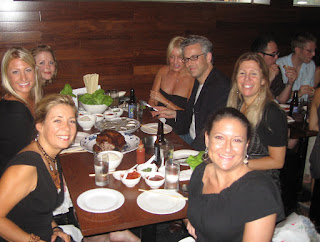 Since we were doing the Bo Ssam, we didn’t want to order too many starters, but we couldn’t resist getting a platter of the infamous steamed pork buns! One cannot go to Momofuku and avoid the pork buns…they are an experience in themselves! 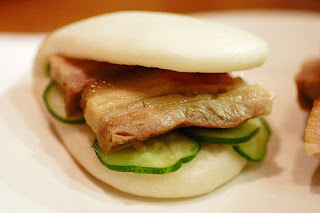 After our appetizing bun teaser, we were ready for them to bring on the Bo Ssam! In Korean cuisine, Ssam, literally means "wrapped," and refers to a dish in which leaf vegetables (lettuce) are used to wrap a piece of meat such as pork, and eaten without utensils. The servers started to fill the table with a small bowls filled with colorful sauces, buckets of lettuce, sides of white rice and a platter of raw oysters in the half shell. 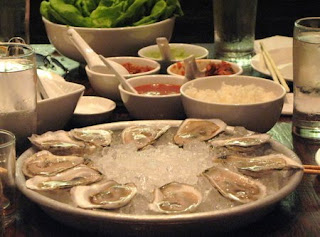 And then, as our eyes started to widened and our mouths began to drool a bit, the large, glistening mound of meat was set in front of us. It was magnificent! 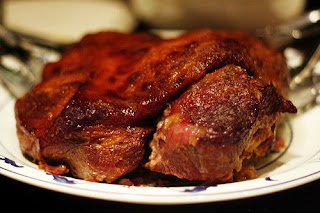 It was a whole roasted pork butt, which was brined overnight in a sugar and salt mixture, and then slow cooked for several hours while being basted in its own juices. Once the meat was fall off the bone cooked, the skin of the meat was rubbed with brown sugar and salt and high roasted until it caramelized! Making it one tender piece of a**! 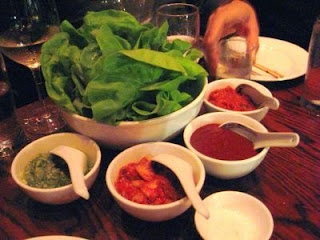 The servers then explained what was going on in front of us and how we should start: They advised us to take a piece of the Bibb lettuce, add a small amount of rice, then pull off some of the succulent pork meat (with skin) layer it on top of the rice, then add one oyster. The final step is to choose one of the three dipping sauces (kimchi, pureed kimchi and ginger scallion) to top off the wrap. The servers said we should try the wrap “naked” first, so we can really taste the flavor of the pork without the spice of the sauce in order to prep our palate. And so we began! 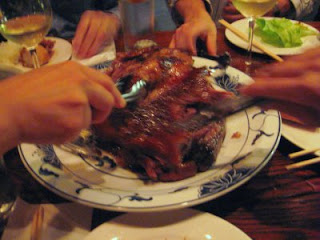 I tried a small chunk of the pork (since I couldn’t wait) while in the process of building my wrap…and it was amazing! Perfectly moist, juicy and seasoned! I could tell this was going to be a meal to remember. As I took the first bite of my wrap, I noticed the unique layer of flavors: the pork had the right amount of salt that complemented the minerality of the raw oyster, the rice was functional as it created texture and helped to bind the contents together, the sauce was the perfect blend of tang and spice, and the Bibb lettuce added a refreshing crunch. The ingredients worked together in unison making my mouth very happy! 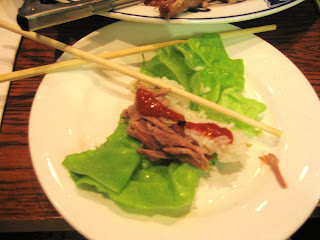 After about 3 handmade wraps I reached my stopping point---I was stuffed! My eyes and mouth wanted more, but my stomach and brain said no way. I sat back and relaxed and took a look at the damage we all did on the little piggy, let’s just say there wasn’t much left of him. It seemed we were all in the state of pork induced food comas, but with big smiles on our faces. It was a fabulous Sunday Funday Dinner, one which I highly recommend if you get the chance. The complete Bo Ssam meal is $200 (about $25 each) and is meant to be shared amongst 6-10 people. A word to the wise: make a reservation at least a month in advance, as there are only about 4-5 reservations for the Bo Ssam per night.