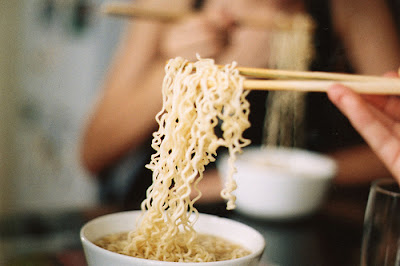 With a bitter chill in the New York air this January, I decided to make it my winter mission to find the best ramen in NYC.  There’s nothing like a warm bowl of silky noodles drenched in a rich, flavorful, hearty broth to soothe the soul.  Over the past month, I have scoured the town and have slurped my way through several bowls of ramen from some of Manhattan’s famed shops.  I tried various styles of ramen and carefully selected my favorites along the way.

But before I get into my “ramen” of choice, I want to help demystify some of the preconceived notions that most people associate with ramen.  And, I also want to provide a bit of history about the labor of love that goes into each bowl.  First off let’s just say ramen is much, much more than a package of hard dried noodles with a small spice pouch available at your local grocery.  Unfortunately, this is what most of the world associates it with, but, there is a very clear distinction between an instant ramen and a ramen from a restaurant.

In Japan, Ramen is a cherished dish served up at specialty shops in which chefs slave over hot stoves for several hours each day to assure that their signature broth is perfect. It is said that it requires years-long practical training to master be a ramen chef.

Side Note: If you want to catch a glimpse of how this specialized process plays out (and you don’t live near a ramen joint) check out a little indy movie called The Ramen Girl starring Brittany Murphy (RIP).  Even though it was a pretty lame movie, it does help to accurately depict how much work goes into each bowl.

Ramen can be broadly categorized by its two main ingredients: noodles and broth.

Noodles: are made from four basic ingredients- wheat (gluten) flour, salt, water, and kansui, which is essentially a type of alkaline mineral water containing sodium carbonate, potassium carbonate and sometimes a small amount of phosphoric acid. Then Kansui lends a yellowish hue to the noodles and also helps create the firm texture that is associated with "ramen". Ramen noodles can come in various shapes and lengths.  They can be fat, thin or ribbon-like, as well as straight or wavy.  In a good ramen, the noodles should be served al dente vs. overcooked and mushy. 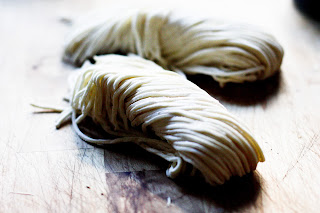 Broth: Ramen soup is generally made from pork stock (in some cases chicken), and combined with a variety of ingredients such as onions, shiitake mushrooms, kombu (kelp), niboshi (dried baby sardines), and beef bones and then flavored with a healthy dose of salt, miso, or soy sauce.  All which is slow cooked for several hours.

From these two staples, ramen is typically divided into a few different style categories:

Tonkotsu: A cloudy white colored broth, that is thick from the boiling pork bones, fat, and collagen over high heat for many hours (typically 12 plus), along with, garlic and soy sauce which suffuses the broth with a hearty pork flavor and a creamy consistency that rivals milk, melted butter or gravy. This style is typically served with thin straight noodles. Toppings include: Chashu (sliced braised/roasted pork belly), scallion and jelly-ear mushrooms, sometimes served with Mayu (charred/black garlic oil).  This is the richest of all broths...with lots of great flavor and fat!

Miso/Sapporo: This broth is typically pork based and infused with miso to create a thick, nutty, slightly sweet and very hearty soup. The noodles served with it are typically thick, curly, and slightly chewy. Toppings can include: sweet corn, bean sprouts, Chashu (sliced braised/roasted pork belly), garlic and a seasoned boiled egg.

Shōyu:  A clear brown broth, based on pork, chicken and vegetable stock infused with plenty of soy sauce, garlic and ginger resulting in a soup that is tangy, salty, smokey and savory yet still fairly light on the palate. This is the most “traditional” style of ramen. This ramen is generally served with curly noodles. Toppings include: Marinated bamboo shoots, Chashu (sliced braised/roasted pork belly), green onion, kamaboko (fish cakes), nori (seaweed), boiled egg, bean sprouts and black pepper.

Now that we all have our ramen 101, let’s get to the good stuff…my top picks!  Ranked in order starting with my favorite: 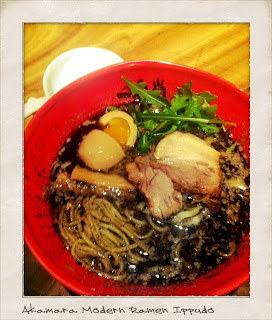 The broth was a silky Tonkotsu cooked with pork bones from Berkshire pigs. The Noodles are thin, straight noodles made in-house. Toppings included: Chashu, cabbage, kikurage mushrooms, scallions, fragrant garlic oil and umami dama (a secret ingredient).
* This was one of the most expensive bowls of ramen I tried, but definitely the best in my eyes.  It was decadent and dreamy and I am still craving it.
Ippudo: 65 Fourth Ave between 9th and 10th Sts (212-388-0088) 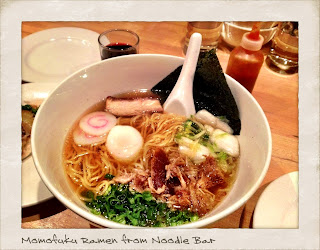 The broth was a based on chicken, kelp, shiitake mushrooms, scallion, mirin, soy, sake and Benton's bacon.  It was light but delicious.  Mr. Chang uses straight alkaline noodles in his ramen. Toppings include: Chashu, roasted pork shoulder, nori, napa cabbage, a poached egg, sliced scallions and a fish cake.  The poached egg yolk added a depth to the broth which helped to thicken it making a nice effect. The pork in this ramen was the best out of all the ramen’s I tasted.  It was perfectly cooked and had great flavor.
Momofuku Noodle Bar: 171 First Ave between 10th and 11th Sts (212-777-7773) 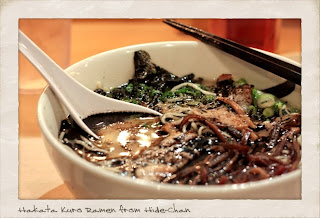 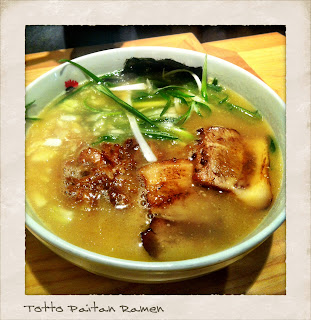 The broth was warming and flavorful made from chicken bones, soy sauce and vegetables.  The noodles were thin and straight house-made noodles. Topping included: Chashu), scallion, bean sprout and nori seaweed. I asked for a side of the rayu (house-made spicy chili sauce) to add to the broth.  It brought out the flavors and gave it a little kick!
Totto Ramen: 366 W 52nd St at 2nd Ave (212-582-0052) 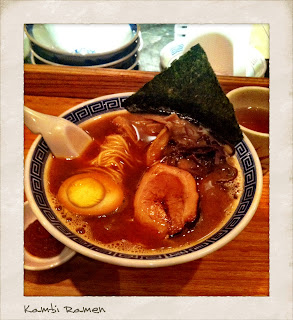 The broth was on the lighter side made from pork and chicken with soy sauce. They served it with Thin- Straight noodles, and were a little overcooked but still decent. Topping included: Chashu, Chinese-style mushrooms, bamboo shoots,  scallions, marinated hard boiled egg and nori.
Kambi: 351 E 14th St between First and Second Aves (212-228-1366) 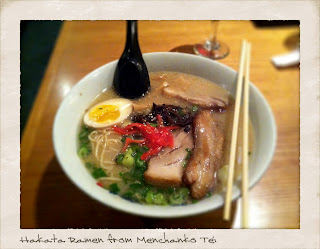 The broth was rich, cloudy Hakata-style pork-bone style (Tonkotsu).  The noodles were very thin and straight.  Toppings included: Chashu, black mushrooms, red ginger and scallions.  The broth and noodles were cooked fine, but the pork was not.  It was flubbery and flavorless.
Menchanko Tei: 131 E 45th St between Lexington and Third Aves (212-986-6805) 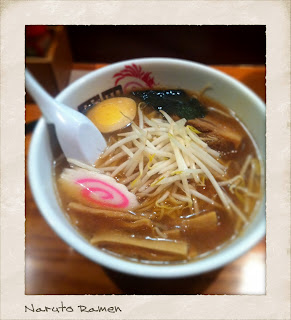 The broth was a soy sauced based Tonkotsu, which lacked in flavor and depth, but the noodles were cooked great and were thin/straight. Toppings included: Chashu, bamboo shoots, marinated boiled egg, scallions, dried seaweed, bean sprouts, and a fish cake.  The pork was not cooked well and was extremely fatty.
*This was my least favorite shop, but it was not terrible.  One plus, is that it's in my neighborhood (on the UES), so if I need a ramen fix, it will be the quickest spot to get to.
Naruto Ramen: 1596 3rd Ave between 89th & 90th (212) 289-7803

One that didn't make the list, but probably would be on top…is the soon to open Ivan Ramen from the famed Ivan Orkin.  Coming to the LES sometime (hopefully) very soon! I will definitely be among the first "in line"

*Please note that most of these locations are "cash only" so make sure to stop by the ATM before planning a visit! Also, most of these shops are very small and typically have a wait to be seated, so don't come starving as you will most likely be standing around for about 20-45 mins.

I would love to hear about some of your favorites....please shoot me a note or email with your choices! 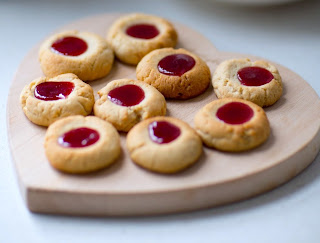 As a kid, I loved Peanut Butter and Jelly sandwiches!  After a walk down memory lane I was inspired to up the ante and develop a new “after-school snack”! These little gems are gluten-free and protein packed, I hope you like them as much as I do!

In a Medium bowl, beat the egg, then mix in the Peanut Butter, Almond Butter, Cane Sugar, and Vanilla, until fully incorporated.

Using a small spoon, scoop about 1 tablespoon of dough onto an ungreased cookie sheet (should be enough to make 18 small cookies).  Then make a small indention on the top of each dough ball with your finger or handle of a wooden spoon.  Next, fill each of the holes with the fruit preserves. 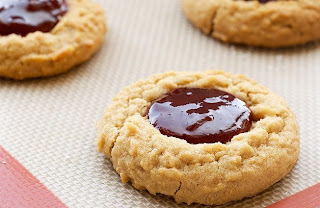 Bake for 10-12 minutes.  Allow cookies to cool on the cookie sheet for a few minutes, then transfer to a clean plate or wire rack to cool completely.

Serve and enjoy with a glass of organic milk or almond milk!  Then go do your homework….
Posted by Emily Nordee (Em a la Mode) 1 comment: